Few visitors to Tallahassee see the Florida Governor’s Mansion immediately. It is not located among the white office buildings clustered around the tower of the Capitol on its hilltop. Those who seek it find pleasant gardens surprisingly close to the bustle of state business, but a world away in feeling. They find a welcoming house, under the shade of live oaks, on a site chosen by legislators when the twentieth century was young. There are many larger houses, older houses, more opulent houses in Florida, but for Floridians, the Governor’s Mansion represents the state in a way no other house can.

This exhibit conveys the changes of nearly ninety years on this historic site. In the present house and in the one which preceeded it, twenty-five governors and their families have lived through the light and shadows of history. Since the first official residence was occupied in 1907, the grounds have known both a carriage house and a garage, a chicken coop and a swimming pool. World War II and the cold war cast shadows here, a blackout room was added, later a fallout shelter was built. The laughter of children, the pleasure of pets, occasions of family joy, and darker times of family tragedy – all are here. The rooms shown in these photographs and the objects that furnish them, as well as the gardens and the outdoor areas, represent a part of every Floridian’s heritage. That they are lovely and gracious should make each Floridian proud. 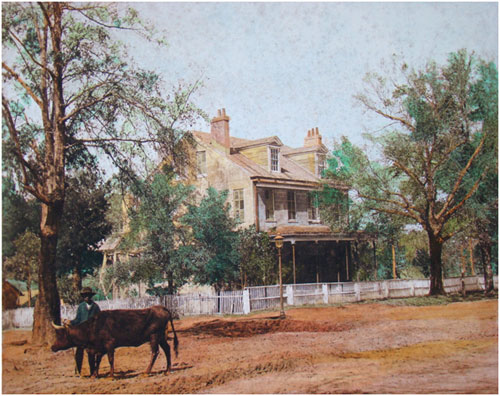 In 1824, Florida's territorial governor William P. DuVal announced that Tallahassee would become the seat of government for the state. For the next eight decades, Florida's chief executives provided their own housing. The Florida Metropolis described the predicament of the governors: "Since the Governor receives but $3,500 per year, he must do the best he can at boarding houses and hotels, precluding proper social functions expected of a head of state." Shown here is the Brown house built in 1850, and used by Governor Napoleon Broward as the governor's mansion from the time he was inaugurated in 1905 until 1907. The house was on North Monroe Street and its demolition led to the preservation movement in Tallahassee. 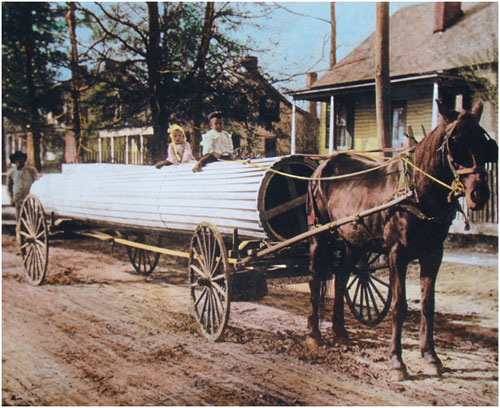 In 1905, the sixtieth year of statehood, the Florida Legislature appropriated $25,000 to build an executive residence for the governor in an act that provided "for the Acquisition of a Site, and the Erection, Building and Furnishing of a Mansion Thereon for the Governor of the State of Florida." When no suitable public lands were found, George Saxon, a Tallahassee banker, generously gifted the state with four lots presently addressed as 700 North Adams Street, on the then northern city limits of Tallahassee. Henry John Klutho, the architect who had helped Jacksonville rebuild after the devastating fire of 1901, was chosen to design the mansion. Tallahassee builder Orion C. Parker was quickly selected and horse-drawn lorries began carrying the wooden columns to the site. Shown here, Parker's sons, Orion and Robert, ride astride a column. 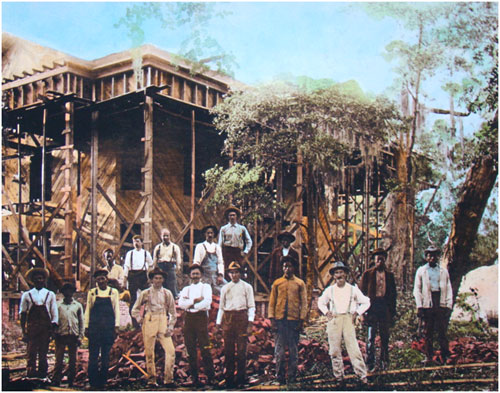 Wearing his signature bowler, Orion C. Parker and his crew pause for a photo showing the progress at the work site. The Tallahassee True Democrat reported on August 10, 1906: "The building is as yet incomplete. From what stands there – its broad front and many windows – it is to be undoubtedly a noble structure, fitted exactly for this climate and its purpose." 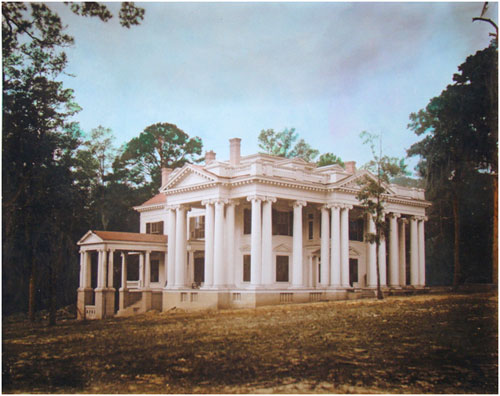 Architect Henry John Klutho's neoclassical plan for the governor's mansion recalled the ancient roots of Florida's democratic traditions. Twenty-four Ionic columns with elaborate capitals vaulted from the front portico floor to the architrave. The (Tallahassee) Weekly True Democrat described Klutho's design as follows: "In these plans the proposed building presents a very handsome appearance outwardly. The front and sides are surrounded by a broad gallery supported by massive columns to the height of the building." 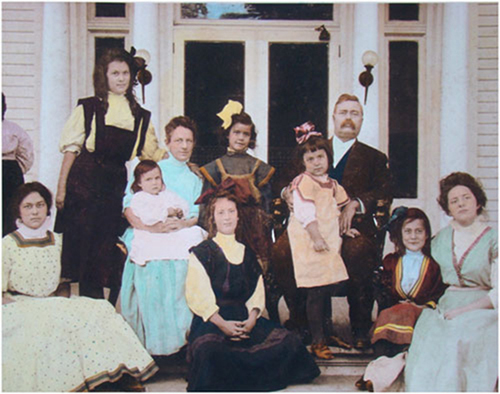 In May of 1907, even though the house was incomplete, Governor and Mrs. Napoleon Broward hosted a legislative reception in the mansion, and four months later, the Broward family moved in.

Here Governor Broward is shown on the steps of the mansion surrounded by his wife Annie and daughters left to right Annie Dorcas, Enid Lyle, Elizabeth Hutchinson (in her mother's lap), Agnes Caroline back, Elsie front, Ellen Jeanette and Josephine, and sister-in-law Elsie Douglass. 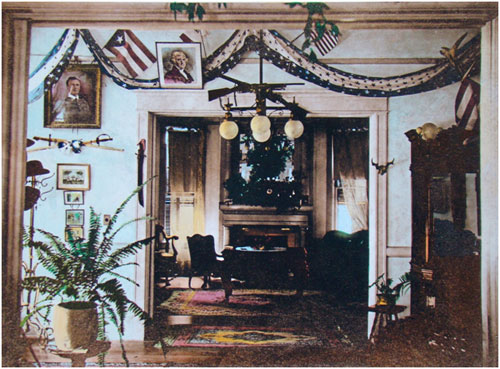 This 1909 interior view of the mansion shows the entrance hall leading into the parlor, and reveals the cluttered look popular during Governor Albert Gilchrist's time. Governor Gilchrist was a bachelor and preferred not to live in the mansion most of the year, but did reside in the official home for legislative sessions, with his mother acting as his hostess. 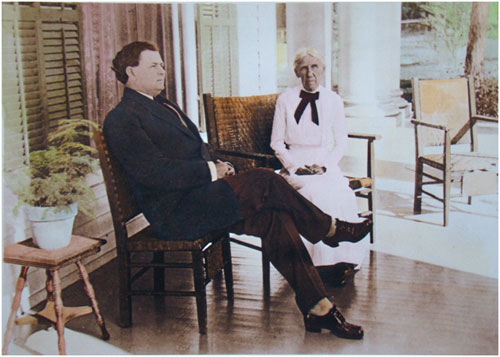 Governor Park Trammell joins his grandmother, Mrs. E. M. Park, on the mansion front porch in 1913. She was visiting her favorite grandson for her 76th birthday. Trammell, Florida's twenty-first Governor, served from 1913 - 1917. 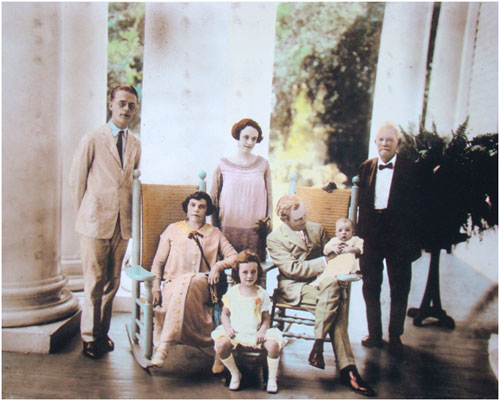 Governor Cary A. Hardee and his wife, Maude Randall both seated, visit with their daughter Louise Day and her family on the mansion veranda in 1922. Mrs. Hardee enjoyed a reputation as a gracious hostess. A Tallahassee society writer reported: "Opened en suite the rooms were tastefully decorated with pink duchess roses, narcissi, and other spring flowers and six tables were charmingly laid for the games of bridge, scores for the afternoon being kept on tallies in attractive designs."

Each of the fifteen families who lived in the original mansion made modifications over the years reflecting the changing times. After the addition of a circular driveway, the grounds became a favorite roller-skating spot for neighborhood children. In the early days it was not uncommon to see cows grazing on the lawn or, as late as the 1940s, to hear chickens clucking at the rear of the property. In response to the need for additional space, workers added lean-to additions on the rear of the building. 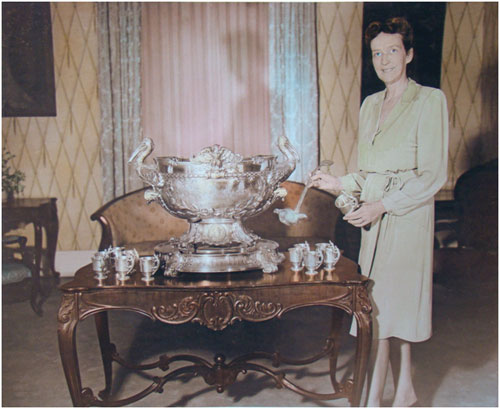 After the battleship USS Florida was decommissioned in 1930, Floridians worked to have the battleship silver returned to the state. Former first lady May Mann Jennings wrote: "The Governor's Mansion was the proper place for the silver, where it could be used on great state occasions and be well cared for between times." Agreeing, the navy sent the silver to the mansion, where it has remained since 1931. First Lady Mary Caldwell poses in 1945 next to the punch bowl with pelican handles and punch cups, decorated with alligator handles. 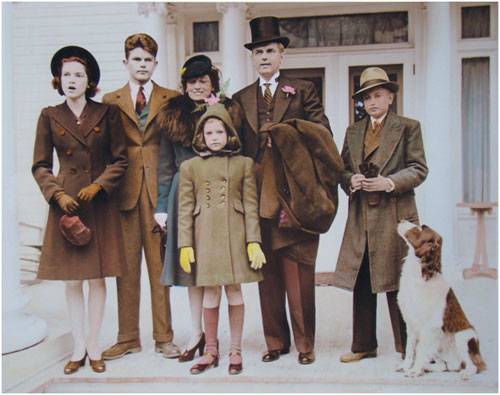 Governor Holland and his family pause for a photo as they leave the mansion for his January 1941 inauguration. Shown left to right are Mary Groover, Spessard Jr., Mrs. Holland, Ivanhoe Elizabeth, Governor Holland, Billy Ben and Mike (dog). The 30-year-old mansion was already in need of repair and Governor Holland, writing to a friend, compared the house to a Methodist parsonage and noted: "They just treated us for termites this morning…I think the fine old house is going to be greatly improved as a place to be lived in by reason of the changes." 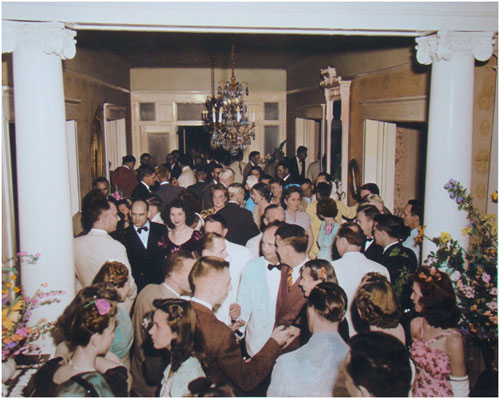 This photo, taken from the stairwell during a 1947 legislative reception hosted by Governor and Mrs. Millard Caldwell, reveals the crowded conditions of the mansion's main floor. First families noted the increasing deterioration of the living conditions in the turn-of-the-century mansion. In 1949, Governor Fuller Warren labeled the mansion "The State Shack" and in 1953 the legislature appropriated $250,000 to build a new mansion. For the next 2 years the location of a new mansion was disputed until newly-elected Governor LeRoy Collins decided to demolish the old mansion and build the new one on the same site. 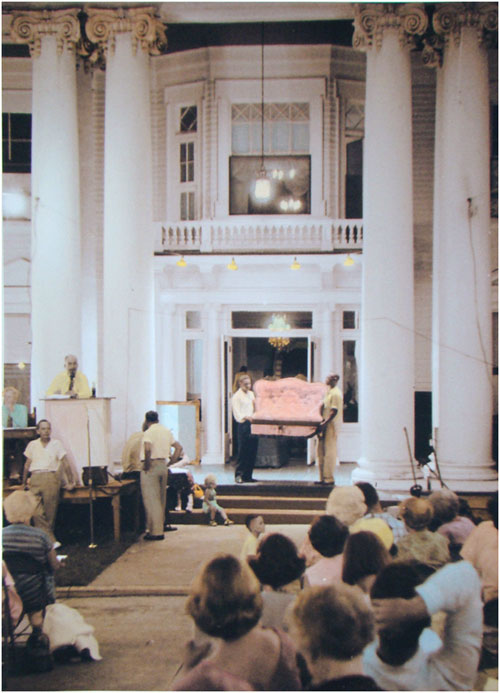 On the evening of July 27, 1955, the mansion's furnishings were auctioned off on the front lawn. This photo shows the bidding for item number 145, a love seat from a second floor bedroom. Auctioneer Howard Cranston extolled its virtues and the selling price was $37.50. 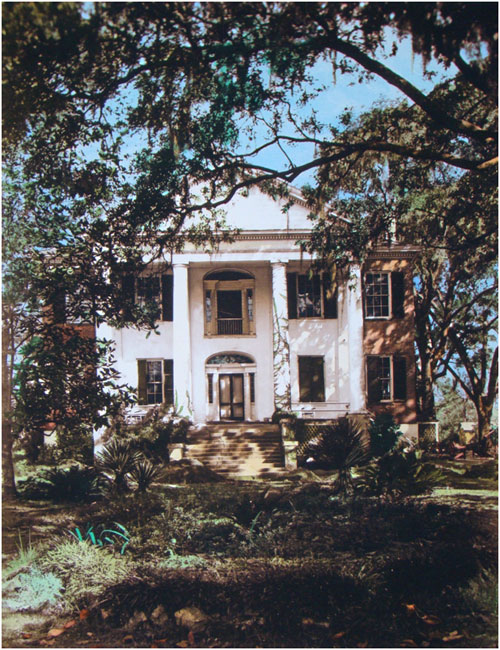 Governor Collins and his family moved back to their home The Grove (shown here) during the construction of the new Governor's Mansion and for nearly two years it served as Florida's official executive residence.The antebellum home was built in the 1820s by Richard Keith Call, territorial governor and great-grandfather to First Lady Mary Call Collins. 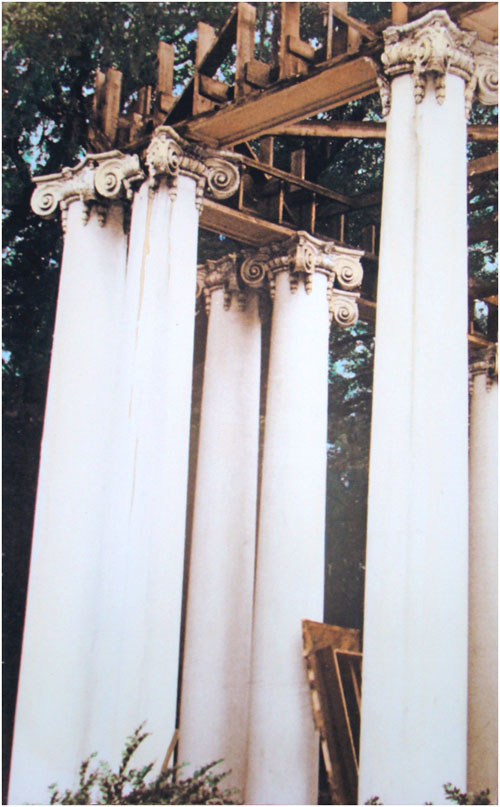 With demolition of the 1907 Governor's Mansion scheduled, P. L. Burkhalter of Jacksonville, won the bid of $900 to clear the site and dig out the foundation. His wrecking company sold architectural remnants of the building as it came down in 1955. The twenty-four Ionic columns remained in place as the demolition progressed. 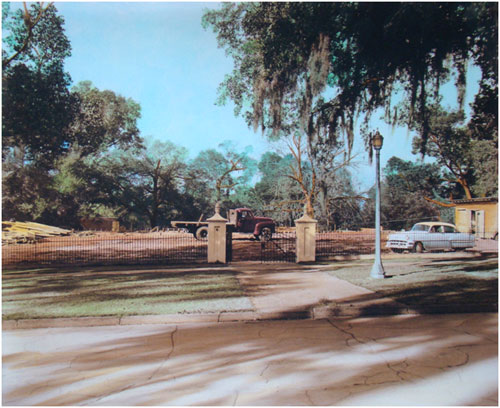 By December of 1955, the lot was cleared and construction was ready to begin on the new mansion. Widely acclaimed architect Marion Sims Wyeth was chosen to design the building, using the Hermitage, the Tennessee home of Andrew Jackson, as his exterior model. 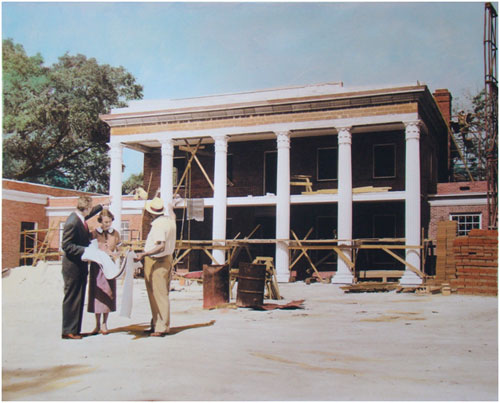 In June of 1956, Governor and Mrs. LeRoy Collins review progress at the site with Tallahassee builder J. O. Carlile. Like Jackson's Hermitage, Wyeth designed the façade of the mansion as a two-story center section fronted by six Corinthian columns. He designed the interior in the style of the great homes of the 18th century, with the entrance on the first floor opening to the formal entrance hall and doorways leading to the reception and dining rooms. The second floor was reserved for the private quarters of the first families. The basement held the laundry, storage and offices. 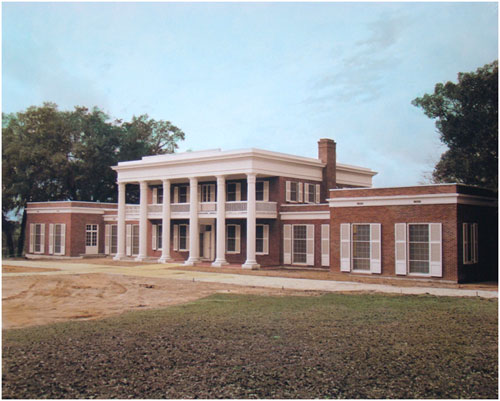 The newly finished Governor's Mansion is shown here in 1956. After a 1957 tour of the house, the DeLand Sun News reported: "…Florida is a great state; and the place where its chief executive lives should reflect this fact. The new mansion for the governor is a credit to the great state of Florida." 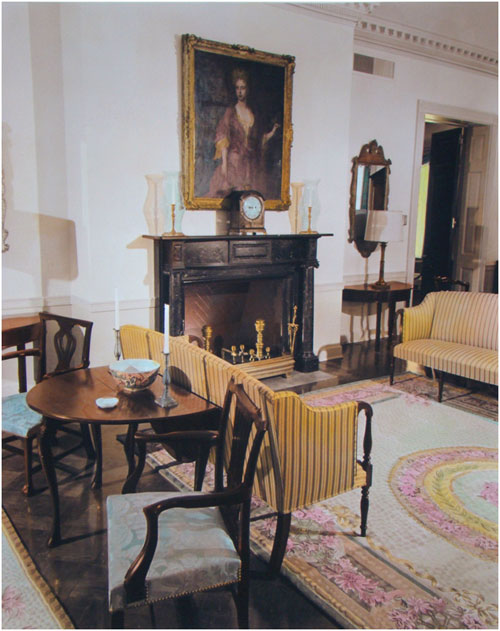 The furnishing of the Governor's Mansion was entrusted to James Cogar, former curator of Colonial Williamsburg. Cogar was the nation's leading expert in colonial interiors and believed he could create "…an interior of distinction by using as many antique pieces as may be practical" within the $80,000 budget. His assemblage of antique and high-quality reproduction pieces created a lasting style and character for the mansion. This photograph shows the reception room in 1957. 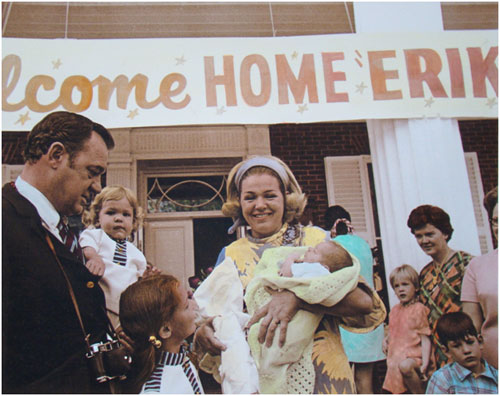 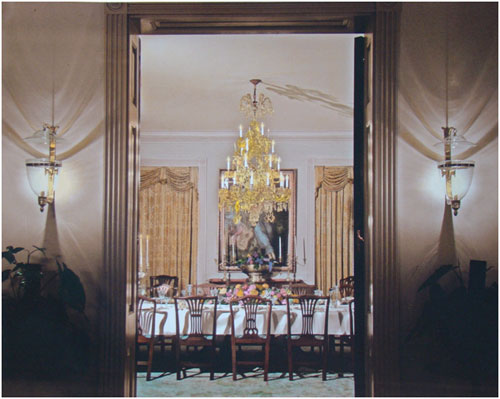 In the state dining room, glimpsed through the doorway from the entrance hall, the cut glass and brass Louis XV style chandelier hangs. The chandelier, according to oral tradition, hung in a French castle when it was made in 1760. Originally it held candles but now supports electrified candles. 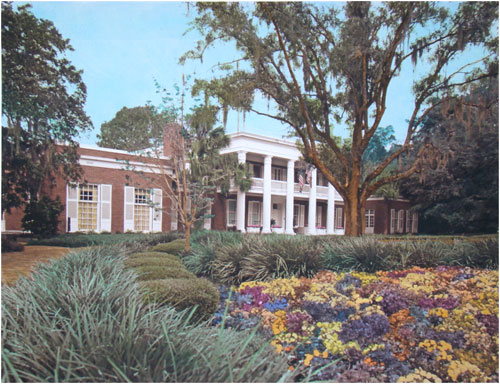 The mansion grounds contain spreading live oaks, shrubbery, old camellias and flowering trees. Brick walkways wind through the garden areas and seasonal bedding plants add color and charm. Many of the plants that fill the gardens are native to Florida, such as the state tree Sabal palmetto, oak leaf hydrangea, and coral honeysuckle. 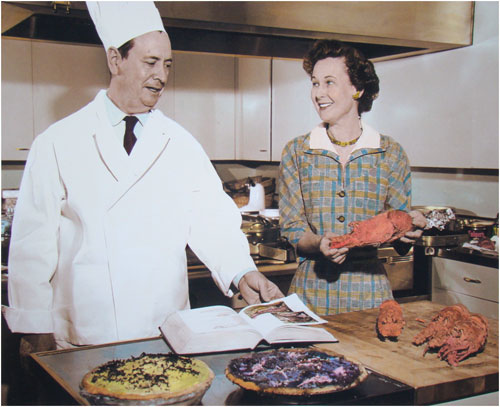 Mrs. Farris Bryant and the mansion chef decide on a recipe for Florida lobster. January 1961 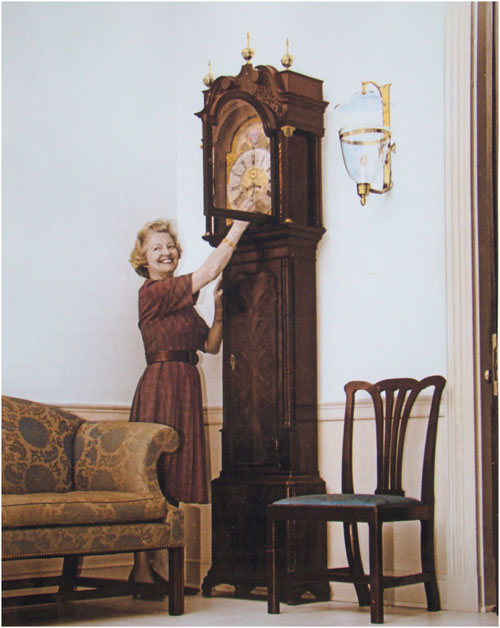 Mrs. Haydon Burns winds the clock in the entrance hall in 1965. This Chippendale mahogany long case or "grandfather" clock dates from around 1790. A hand painted moon dial, a calendar dial and a second hand are some of the features of this charming eight-day timepiece. 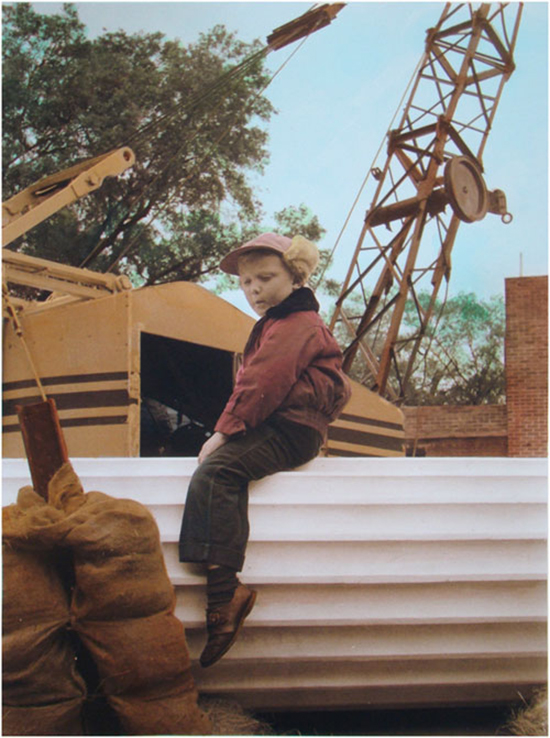 Weldon Carlile, son of builder J. O. Carlile, sits astride one of the six columns for the new mansion. This scene, reminiscent of a 1906 photo taken of the sons of the builder of the original mansion, was captured in January 1957.