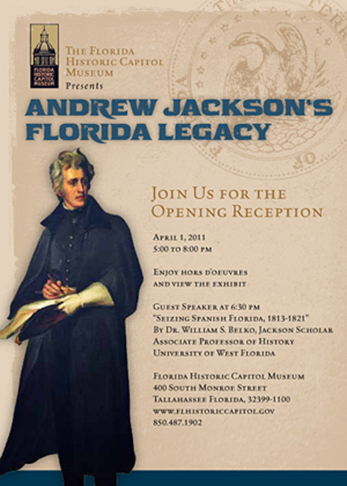 The Florida Historic Capitol Museum will open a new exhibit titled Andrew Jackson’s Florida Legacy on April 1, 2011, and it is scheduled to extend through December 2012. The exhibit explores Andrew Jackson’s controversial legacy as well as his influence on Florida’s acquisition and early governmental development.

The public is invited to a free Opening Reception on April, 1 from 5:00 to 8:00 p.m. Guest speaker, Dr. William S. Belko, will lead a discussion at 6:30 PM in the Restored House of Representatives titled “Seizing Spanish Florida: Andrew Jackson, Jeffersonian Manifest Destiny, and the American Acquisition of Florida, 1813-1821.” Dr. Belko is a scholar of Andrew Jackson and an Associate Professor of History at the University of West Florida.

“Andrew Jackson was a controversial figure in his lifetime just as he is today, and his legacy continues to fuel debate,” says Historic Capitol Curator Michelle Gammon Purvis. “We hope that Andrew Jackson’s Florida Legacy allows visitors to understand the context of Jackson’s influence, develop their own opinions, and engage with one another on this topic.”

The exhibition covers Jackson’s Florida experiences during his two military campaigns, his term as Governor and his influence over the Florida’s Territory while President of the United States. On display are military artifacts from the occupation of Pensacola during the War of 1812, a coffin lid belonging to one of Jackson’s soldiers during the First Seminole War, and various letters and documents relating to Jackson from the Call-Brevard Papers collection at the Florida State Archives.