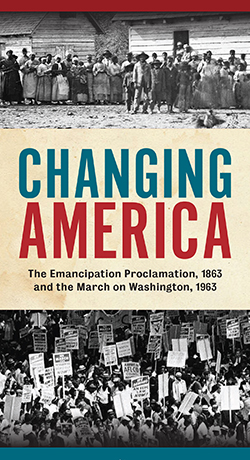 One hundred years separate the Emancipation Proclamation and the March on Washington. Yet, these two events are profoundly linked together in a larger story of liberty and the American experience. Both were the result of people demanding justice. Both grew out of decades of bold actions, resistance, organization, and vision. In both we take inspiration from those who marched toward freedom.

Changing America was created to commemorate these two pivotal achievements on their 150th and 50th anniversaries. It explores their historical context, their accomplishments and limitations, and their impact on the generations that followed.

Changing America: The Emancipation Proclamation, 1863 and the March on Washington, 1963 is presented by the Smithsonianגs National Museum of African American History and Culture and the National Museum of American History in collaboration with the American Library Association Public Programs Office. The tour of the traveling exhibition is made possible by the National Endowment for the Humanities: Exploring the Human Endeavor.

Join us for an evening History Hop featuring the opening of the Smithsonian traveling exhibition Changing America: The Emancipation Proclamation, 1863 and the March on Washington, 1963. Learn about these pivotal national events from Dr. Phyllis Gray-Ray, Chair of Florida A&M University’s Department of Sociology and Criminal Justice, and then travel to historic locations to hear some of Tallahassee’s unique Civil War and Civil Rights stories.

Start at the Historic Capitol for all of the exhibit opening fun. Then at 6:00 p.m., travel on foot to the Union Bank and the Civil Rights Heritage Sidewalk or hop on the trolley running to and from The Grove Museum. Each site will offer a special experience.

When Mildred and Richard Loving were arrested in July 1958, in Virginia, for violating a state law that banned marriage between people of different races, such laws had been on the books in most states since the seventeenth century. But the Lovings never expected to be woken up in their bedroom in the middle of the night and arrested. The documentary brings to life the Lovings’ marriage and the legal battle that followed through little-known filmed interviews and photographs shot for Life magazine.

Film will begin at 6 p.m. (77 minute runtime), with a discussion to follow led by Reginald K. Ellis, Associate Professor of History, Florida A&M University. The event is free and open to the public and refreshments will be served.

October 5, 2017
Lift Every Voice: A Musical Evening With Avis Berry
Time: Exhibition open from 5:30 p.m., Musical program to begin at 6 p.m.
Refreshments provided
Free and open to the public

Music played a vital role in the fight against slavery, as well as encouraging the march towards freedom and equality in the 1960s. The rousing sounds of spirituals, gospel, and folk music served many purposes in these times of struggleגstrength and motivation, healing and comfort, or joy and celebration. Join us for a musical evening with local singer, Avis Berry as she performs the empowering songs of the African American experience.

Emancipation was not the product of one act but many. Americans, enslaved and free, chipped away at slavery through daily acts of resistance, organized rebellions, and political pressure. For most white Americans, the Civil War was a war for the Union, but for black Americans, it was a battle for freedom. Determined to end slavery, tens of thousands of enslaved African Americans used the war to escape their bondage. As the Union Army drove into the Confederacy, enslaved people stole away and entered Union lines. The people had spoken, using one of the few political tools available to enslaved people ג the power of coming together to be heard. The sheer number of African Americans arriving in camps and cities pressured politicians, generals, and the U.S. government to act. These thousands of African Americans made their freedom a fact. Within two years, President Lincoln issued the Emancipation Proclamation and made ending slavery government policy. 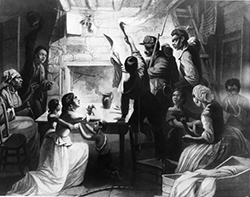 On September 22, 1862, five days after the Union victory at the Battle of Antietam, Abraham Lincoln issued the preliminary Emancipation Proclamation. He presented the proclamation as a wartime necessity, under his authority as Commander-in-Chief. It ordered that as of January 1, 1863, all enslaved individuals in all areas still in rebellion against the United States גhenceforward shall be free,ג and under the protection of the military. Those willing to enlist would be received into the armed forces. Once free, more than 186,000 African American volunteers fought to liberate those still held in slavery. The proclamation was limited in scope and revolutionary in impact. The war to preserve the Union also became a war to end slavery.

The Emancipation Proclamation committed the nation to ending slavery. The U.S. Congress responded with Constitutional amendments, abolishing slavery, expanding citizenship rights, and giving black men the right to vote. These acts changed the political landscape, but these new freedoms were stripped away in the years that followed. During the darkest days of Jim Crow segregation, black Americans continued to press for full citizenship. Each Emancipation Day, African Americans organized parades reminding the black community and the entire nation of a commitment that remained unfulfilled. These local celebrations set the stage for the national push for freedom in the 20th century. 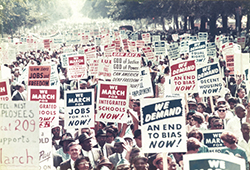 THE MARCH ON WASHINGTON

On August 28, 1963, work in the nationגs capital came to a halt as hundreds of thousands of Americans gathered for the biggest demonstration ever seen in the District of Columbia. On buses, trains, cars, trucks, airplanes, and on foot, people traveled from every state. The world watched as an estimated 250,000 people ג united across race, class, and ideological lines, and representing organizations, unions, churches or simply themselves ג poured into Washington and onto the grounds of the Lincoln Memorial.

The events of that day ג the prayers, the electrifying speeches, the stirring music ג helped mark the 100th anniversary of the Emancipation Proclamation and reminded Americans of the nationגs long pursuit to fulfill its founding principles of liberty and equality for all.

For the millions of people who participated or listened to the speakers on radio and television, it was a moving and unforgettable call for social justice. 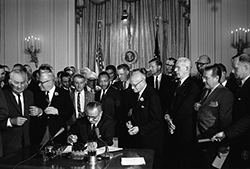 In the months following the march, demonstrations and violence continued to pressure political leaders to act. Following President Kennedyגs assassination on November 22, 1963, President Lyndon Johnson broke through the legislative stalemate in Congress.

The passage of the Civil Rights Act of 1964 and the Voting Rights Act of 1965 were turning points in the struggle for civil rights. Together the two bills outlawed segregated public facilities and prohibited discrimination in employment and voting. The success of the March on Washington and the achievements of the modern black freedom struggle reverberated throughout society and provided a model for social change. The power of mass nonviolent demonstrations inspired Americans fighting for equal rights and access to opportunities regardless of race, gender, ethnicity, religion, age, sexual orientation, or disabilities.