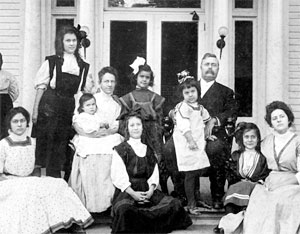 The exhibit entitled Napoleon Bonaparte Broward: Gunrunner to Governor opens March 2, 2010 and runs through Fall 2010 at the Florida Historic Capitol Museum in Tallahassee. Its focus is on the varied aspects of the man’s life whoגfairly or unfairlyגis remembered today mostly for his efforts to drain the Everglades.

The exhibit is presented in the same building in which Broward governed during his term as Florida’s governor (1905-1909). According to Andy Edel, Exhibit Projects Manager at the Florida Historic Capitol Museum, Broward’s primary political initiatives involved progressive legislation including child labor laws, a re-organization of the university system, the open primary, and campaign reform.

The Broward exhibit was made possible through the generous efforts of Senate President Jeff Atwater and his cousin, Doug Broward of Atlanta, both great-grandsons of Governor Broward, who allowed the Museum to exhibit personal possessions and artifacts of the Governor that have never before been placed on public display. Among these items is the six-foot wooden pilot’s wheel from Captain Broward’s famous tug boat, Three Friends. While evading patrolling warships of the Spanish Navy and the U. S. Coast Guard, Broward used the tug to transport shipments of food, weapons, and ammunition to Cuban revolutionaries, then at war with occupying Spanish troops. Other artifacts include Broward’s personal pocket pistol, brass knuckles and a gold watch bearing the new flag of the Cuban Republic.

“The exhibit tells the dramatic story of Governor Broward through a series of photographs, documents, memorabilia and display panels that interpret his life and times,” Edel said. “We are also pleased to exhibit a beautiful oil painting of the Three Friends and a detailed scale model of the famous tug boat on loan from the Jacksonville Maritime Museum.”

Napoleon Bonaparte Broward: Gunrunner to Governor will be on view in Room 121 of the first floor of the Florida Historic Capitol Museum from March 2nd to Fall 2010.